In the Outback counts the name Birdsville for two… It is a really must do, so the next part of my trip I intend to visit the entire part around the small city. The Simpson Desert at the east, named as one of the biggest 4WD experiences in the country, the lakes of Innamincka to the south and the Channel Country up in the north. A promising part…

When I leave the Camooweal National Park, I pass along the two caves at which the park thanks its name, but without specific speleological material, there is no option to explore the caves. So I exit the park and drive immediately to Mt Isa, a mining city some 200 km’s further. The city itself has nothing special, I just use it to restock everything – fuel, food,… And I find a nice camping spot in the outskirts of the city.

The road to Birdsville takes a while, but today I just drive the initial part. From Mt Isa along dirt roads to Duchess, further south to Dajarra and then straight to Boulia. The only significant elements along this road are the many animals, cattle, some eagles, a lizard, a couple of horses and the changing of the vegetation. In the beginning there are lots of trees and some small grasses, but around Boulia it are the desolate desert plains that make everything up.
When I leave Boulia next morning, I head to Bedourie, the last outpost before Birdsville. Along the road, I pass a couple of beautiful desert plains and enjoy the ever changing landscapes. Some have trees, some shrub, others are rocky plains and there are a couple of sand dunes to be seen.
Around midday I arrive in Bedourie, but head then along the Bilby Track to Bordsville. Big parts of this road are sealed, but some parts stay unsealed. This Track leads through the Channel Country, but at this time there is hardly a channel visible. Last year around this period the whole area was flooded. It is a strange feeling the possibility of all that water in the desert, but this is part of the huge Lake Eyre Bassin, fed by the rains in the North. Along the road I stop at a billabong, to spot a couple of swans. Horses, emus and cows swarm along the roads. An old ruin stays desolate in the landsape, at the ‘Shoe Tree’ I regret I don’t carry another pair of old shoes to add and before Birdsville a number of eon old Waddi Trees stand erect.
Birdsville itself is a very small town, some four streets, a hotel, roadhouse, the famous Bakery and a couple of houses… But all that is not what makes the town… It is the nearby Desert that trickles me and many others.

The Simpson Desert… Famous for its 1100 sand dunes you cross between Birdsville and Dalhousie. The 500 km between two points is one of the most beautiful 4WD trips Australia is rich it is said…
Otherwise it is a very challenging trip, in summer (from 1 december till 15 march) the desert is closed because of the enormous heat. Up to 50° during the daytime. The most difficult part of the trip is the fuel, you need to carry some 250l of petrol to make it from one side to another… Quite a lot.
My precious Janis cannot carry that much fuel, so I plan to drive in and when I reach half my fuel consumption, I plan to return, just to have a taste of the adventure. In the information centre my plan is greeted with great scepticism, according to them I may only make it to the Big Red, some 35km’s from town. But that is not to my liking! I want some real adventure and stick to the original plan.
During my fuelling up – 140l – I meet the local agent and leave my contact information with him, just in case. After a double check of my fuel, water and food reserves I finally set of…

The first 35 km’s to the Little and Big Red, the two highest dunes in the desert (40m tall) and my first, are simply unsealed roads and then all of a sudden the gravel road changes into a sandy track up to the dune. From all I heard, crossing from east to west (from Birdsville to Dalhousie) is harder than the other way. The winds shape the dunes mostly from west to east, so the eastern slopes are the steepest ones.
And I have to climb these ones up first…
I already made my preparations, locking the hubs, put the car in 4WD and diminish my tyre pressure to 25-27 psi. That way I climb the first dune easily. Pfieuw…
When I arrive at the second, I try the same way as first, but I fail. Driving backwards and retry… After some 4 trials, both in high and low 4WD I’m still not up. So I give my tyre pressure another deflation – 20-22 psi – and retry. This time I’m up in no time… So keep on going. It should be hard to have to give up that early!
After these first two high dunes, the next ones come more easily. A couple of dunes later I really get the taste, start to relax and really enjoy the driving.
The landscape is quite stunning, you face a red dune, then some flat plane and then another dune. So it’s not up and down all the time. This is Fraser Island in the big, jippie.
I closely watch my fuel, but today, after some 100 km’s I still have loads of pleasure for the next days.
I’m looking forward to it.

Today I keep driving into the desert. The first part is similar to yesterday. Some huge dunes with flat spaces between. The car bumps so much at moments that I suddenly lost my radio aerial. I’ve no idea when, but al of a sudden it’s gone.
After some 60 more km’s the landscape changes, numerous salt lakes appear. Huge grey fields between the dunes. The roads leads on special locations through them and otherwise around. These are really tricky ones, dangerous to get bogged in if you leave the marked tracks.
After that I arrive at Poeppel Corner, the point where three states intersect, South Australia, Queensland and the Northern Territories. One step is all it takes to change state or time zone. Everyone different, each time half an hour time difference.
From then the track becomes much rougher. Shorter hills and dunes, but deeper sands. Some dunes I need another try before I get on the top. The last one proves to much, but I reached the point I wanted, I could even drive further… So perhaps I’ll give him another try tomorrow morning. My tyres are then softer and after a cold night the sand is a little less boggier… However after 200 km’s in the desert it is time to return because of my fuel supplies. I intended to go till Poeppel Corner, I could drive some 25 km’s further, so it is a success.
Only my campsite proves to be hard… Swarms and swarms of flies that don’t even disappear at sunset, when they finally stop, the ants take it al over. Stinging and biting as soon they reach my feet. When I finally think to have shelter in my tent, I discover even there numerous flies. Luckily they sleep for now… And perhaps tomorrow morning I’ll get rid of them at first light.
But that is a side of the Outback I’ll never get accustomed to.

The flies don’t prove hard to get rid of, so my tent finally gives the shelter I needed.
I give the sanddune another try and my second trial is the successful one. I reach the top. There I turn around and start returning. Because of all the lovely flying and stinging sixfeeters, I decide to take breakfast at Poeppel Corner, perhaps I’ll get some more rest over there.
Once there the hardest part is done. I look forward at the rest of this amazing trip.
He already earns by right a huge 4WD experience! The return trip is as expected easier than the going. The dune climbs are less steep, but the going down looks nicely steep!
At the end of the day I find a nice camping spot, with not that much flies and no ants… What a relief!

My fourth day in the desert, is just the exit. Before the last dune, I intend to play on the hard part of the Big Red. Most of the slopes are to much for Janis, but one is all it takes to get to the top.
There I enjoy the view that others also have a hard time to get up, even with their high tuned car.
The old red fury still counts, but a boggy sand at the dune end is to much.
After all I discover that the 250l fuel presumption is extremely conservative. I drove 400 km’s with 117l, people tell me that the second leg of the track is much rougher and consumes more fuel, but everyone agrees that 180l should be sufficient to cross with the old cars…
The most recent cars even make the crossing with some 105 up to 120l.

That afternoon I arrive back in Birdsville. I tell the local police that I’m back, inform about Innamincka en take a place at the local campsite. I really need a shower and want some less flies…
There I plan the next part of the trip, because the lakes at Innamincka are closed for a couple of years now. 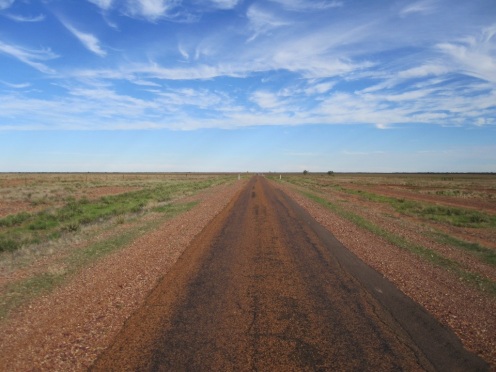 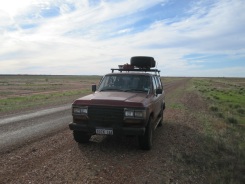 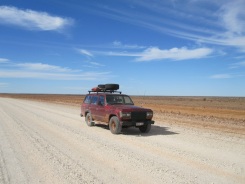 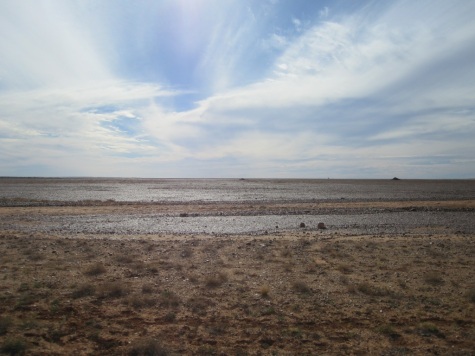 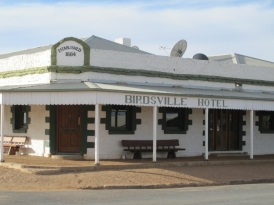 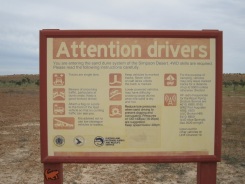 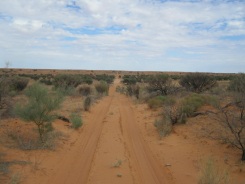 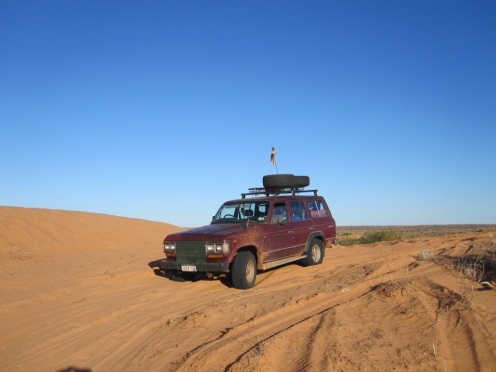 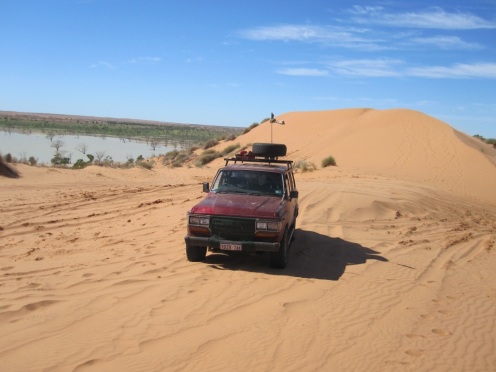 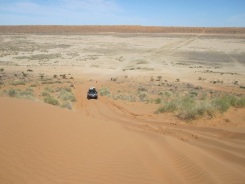 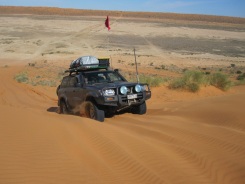 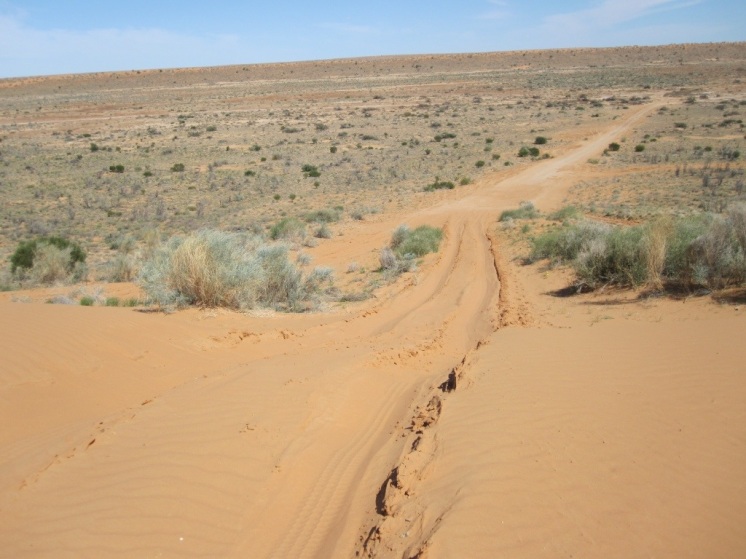