So early morning we head to our welder – to repair the exhaust tube. Will he be there? And what about the beer? After all, it goes quite easy and one hour later that problem is fixed. In the meantime we looked in a Repco store for some spare parts and lucky us, they got the distribution cap and rotor. So we buy them and place them ourselves, we also spray some water repellent on our engine and repair two holes in the exhaust tube that could not be welded.
At the same time we rearrange the load of the car for a heavy 4WD. With two 20l tankards on the rooftop, we’re not always that stable. Safety before all…so some work to be done.

After 2 hours working and fixing at our Janis, we head happily to the Bungles or the Purnululu National Park. Another 100 km further from Halls Creek. At the park entrance we stop, deflate our tyres till 30 psi – to decrease the risk at tyre damage with the many sharp stones ahead – and put her in 4WD.
We pass a couple and ask if they would mind if we drive into the park together, they agree. After all that happened with Janis the last couple of weeks, the many stories about entering the Bungles – you have to walk over stones, the roads are horrible, you’ll ruin your car there – and the guy at the entrance ‘I returned because the road is too bad’, we can use some boost.
The trip starts well and the further we drive, the more we like it! Some creeks, a couple of steep slopes and stones along the road cannot hold us and finally we enter the park! A sigh of relief, Janis feels again like her old self and we can go on!

First stop, the visitors centre, to book our camp sites and to get information about the park.
That afternoon we bring a visit to the Echidna Chasm, a wonderful, narrow stitch in the earth! Incredible to walk inside. The game of light and shadow in there is marvellous. Tired, but happy we head to the Walardi Camp site. There we have to prepare all for a two day overnight hike inside the Piccaninny Gorge! What a possibilities!
The bungles are another remnant of the Devonian times. The distinctive rounded rock towers are made of sandstone and conglomerates moulded by rainfall over millions of years. Their stripes are the result of oxidised iron compounds and algae. To the local Kidja people, purnululu means sandstone, with Bungle Bungle possibly a corruption of ‘bundle bundle’, a common grass. Whitefellas only ‘discovered’ the range during the mid-1980s. And by now it is one of the specialities of the Kimberleys and a World Heritage Area.

Next morning we plan to leave early for the great desert walk. The entire trip is about 30 km’s trough desert and gorges, with no foresight at swimming pools – only one drinking pool (swimming forbidden because of the pollution) after 10 km’s walking. Are we crazy or so? Or simply lining and testing ourselves?
But the preparations take some more time as planned and the early morning light in the bungles proves to be an excellent photographer moment… With a couple of them taken from the rooftop of Janis! So time passes and heat increases, but we don’t mind yet.
At 8am we finally start walking slowly, still taking lots of pictures. The marvellous environment, hard rocky soil and our optimism makes it all possible. But around 10am the heat is almost unbearable and our water supplies shrunk till half the amount of 8l. But far worser… The terrain changed drastically! From the solid, rocky soil to rolled gravel or loose sand. We hardly go forward. 11am passes… Only 2,5l of water… But not yet 10 km’s passed… Noon… The gorge seems to come closer… And then 1:30pm… We see what seems to be the ‘Black Rock Pool’ – our rest place and refill station. Just a 200m rock climbing with the heavy bags till the idyllic spot over there. Exhausted we drop in the sand, enjoy the rest and refill the water. Cold water never tasted that delicious! Dreaming of a swim, while only respect for the ones after us holds us back.
After that heavy walk, we decide at once to spend here three days, otherwise we’d need to rush too much and none of us likes the idea of the trip back… Only our food supplies need some control.

Enjoying the long break, we plan to go ahead for the next 4 km’s inside the gorge. Now we carry almost 12l of water, simply because we just return to that refill station tomorrow evening and we’re well aware of the value of water in a desert environment.
Like two mules we hardly go forward in the loose sands of the gorge. The views are stunning, but we’re almost to tired to enjoy them really much. Halfway, somewhere between the rocky walls we decide to camp. At 5pm it’s already sunset and at 5:30pm all is dark. At 6pm both of us are snoring after that long day. And snoring we do, despite the hard sandy soil… Never taught sand could be that hard to sleep on!
Early morning we go deeper inside, loose once again lots of time with pictures and leave our luggage and half of the water supplies somewhere halfway. We climb – sometimes at all four – along the rocks, wade trough waters (with some big lizards inside) and plough trough loose sands to reach the end of the gorge. The heat there increases incredibly fast, our water supplies flow like nothing and sweat rains from us. But we made the end and so do our water supplies! 3 km back with no food and hardly any water… How will we do that? I decide to refill my bottle in one of the other small lizard pools, while Ilse drinks the few water from the rock pool. Going back goes little easier – we know the way and have taken the pictures before… But the food and water never tasted better once we found them back!
After a small rest, we head back to the Black Rock Pool to stay overnight there. Hard sandy soil gives no sleeping problems, we just enjoy the scene and the mysterious place.

Next morning – Ilses birthday – but we don’t feel that much about feasting! The setting is miraculous, but the 10 km’s back are longing. We’re both deadly tired, dreaming of showers and swimming pools, but we keep our pace. Luckily we spared some strong foods for underway and the path becomes rockier with every step!
Finally we reach our car, receive COLD water from some other people and relax a short time.
These last days we made our trip in temperatures of 40 up to 45 degrees…
We made it! What a trip… Stunning bungles, a magical gorge, some idyllic sleeping locations and a huge adventure richer we’re back in reality. We’ve seen enough bungles for a couple of years. No helicopter flight is needed anymore. We got a real interior delight.
That afternoon we leave just in time to take some more pictures inside the Echidna Chasm with our tripod and enjoy the magical setting of the spot once again. On our road back, we meet a ranger who tells us they are closing the northern part of the park because of the forest fires nearby. They infuriate the entire area.
After all these adventures we enjoy the 4WD trip out the park and park the car along the road… Still dreaming of water, showers and swimming pools.

Early morning we leave for the second part of the Gibb River Road… Along the road, smoke clouds accompany us. The heavy forest fires ask a deadly price here in this extremely hot, dry season.
But we’ll visit a gorgeous area with lots of water… The ‘El Questro’ area – it feels a little bit like a natural centerparks with all the rivers and streams.
We start with the Emma Gorge, a stunning circular, turquoise pool with a raindrop fall. Miraculous… But more! WATER… We jump in it, play and enjoy the liquid and spent too much time over there.
Afterward, we hurry to the El Questro gorge… But euhm… This can only be reached after a rough 4WD track trough 80 cm deep water, about 50m long, some really stony passages and a 6,5 km walk, at 3:30pm no more time is available for the walk. So we decide to go for a swim in the nearby Moonshine Gorge and leave the other one for tomorrow.
At All these places is no camping permitted, so we leave early to find a marvellous spot along the river shore, all alone – except for the numerous animals – bathed in the moonlight. Relaxing, especially after two long swimming parties today. In this heat almost the only option left. Be wet and stay wet…

Next day we head for the El Questro Gorge… After all a really good idea. The walk to the 6,5 km trail along a rocky landscape and some monsoon rainforest areas is extremely beautiful. One of the best walks we already did on the trip. The Mac Micking Gorge at the end of the trail is of a stunning beauty. Crystal clear waters, the relaxing sound of a waterfall entirely surrounded by a green setting. The water shines in all shades of green and blue… So once again we jump into the waters and swim.

In the afternoon we head to the Amalia Gorge with a fall… To end the visit of the area.
After a short walk, we arrive at a promising pool, but so late in the dry season the fall has entirely dried out. Without thinking or worrying we jump into the waters to cool down after the heathy walk. So we swim to the end of the pool, when suddenly a green moving animal – a freshie – scares us heavy. We both turn around and swim at top speed to the shore. There we turn around to look for the animal, but probably the croc was scared as much by us as we were by her. So no trace of her can be found and still impressed by the adventure we go back to the car and drive to Kununurra, the last city before we leave Western Australia. By entering the city Ilse remarks a sign ‘Purnululu Park Closed’ – fire alarm. Lucky us, a couple of days later and we wouldn’t be able to visit the park.
There we take a shower, refill our food supplies, do the laundry and fill our fuel tank. Afterward we drive out the city to a small rest area along the road to sleep.

Tomorrow we head a 600 km trip to Katherine, with only one stop… The Lake Argyle on the Ord River. A beautiful landscape, formed by quite a small dam is the last frontier before entering the Northern Territories.
This lake serves as a huge recreational area – known for fishing, camping and boat trips – and is used as an irrigation lake for the area. 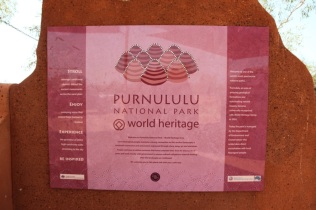 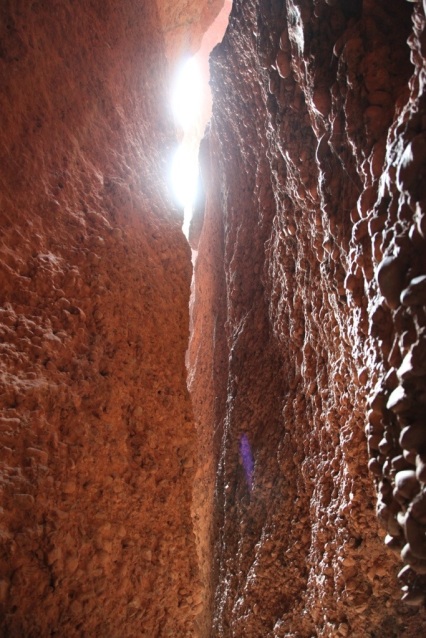 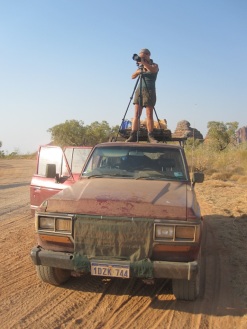 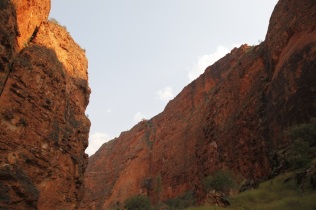 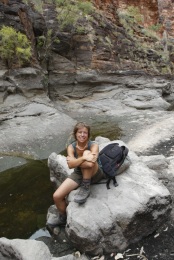 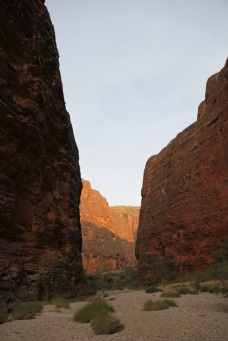 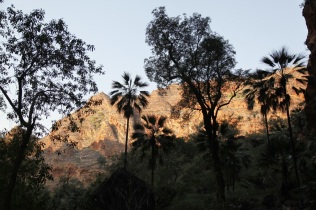 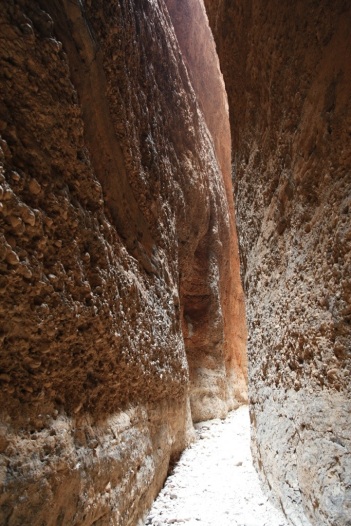 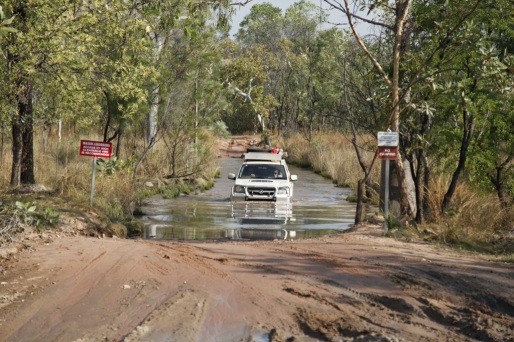 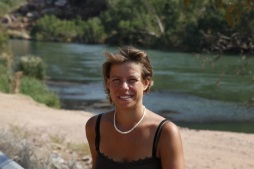