The Aboriginal people knew about the beauty of the island, when they named it K’Gari, what means paradise. Fraser Island is the biggest sand island in the world, 120 km long and 15 km wide. It is a huge mass of sand, with an entire rainforest on it. Part of the beauty of this patch of land is formed by the numerous freshwater lakes. These are formed by the rain, falling on an impenetrable soil layer, formed by the remnants of leaves and other organic materials.

There are also some small villages on the Island. Happy Valley, Eurong, Orchid Beach and Kingfisher Bay. We often wonder what these people over here do for their living.
For us it is a big 4WD playground… There are no sealed roads at all, only sand roads and 75 mile beach. A beach at which driving is allowed during the low tide. At that moment it becomes a sandy highway.
Fraser is also known for its colony of dingoes living there. It is the purest strain living in Australia, because of the isolation. These wild dogs are accustomed to humans, so they normally do not attack them. Nevertheless some precautions need to be taken care of. Never feed the animals, clean fish at special areas and keep all rubbish inside the cars. An interesting fact about them is that they can climb trees… They normally weigh up to 20 kg, become 5 to 7 years old and communicate with wolf like howls.

Before we can head to the Island, we stop in the nearby Maryborough. A small city, known because the author of the Mary Poppins books – PL Travers – was born here and it is one the oldest town in Queensland. So lots of information is given about the city’s heritage trail. We give it a try, but I get soon disappointed. Except for some toy-like buildings and a Mary Poppins statue, there is not much of interest.
In the information centre we can book our park campsites, ferry and car permission to enter the island. The friendly hostess also tells us the whales already passed by in Hervey Bay. Sometimes they still are here at the beginning of november, but not this year. Because they use the closed bay as a nursing area for their young, the whales are a real attraction over here.
So the small detour – only 25 km’s – to Hervey is no option and we head directly to River Heads where our ferry leaves at 16h. There are only three cars on the boat, so its pretty quiet. Just after getting on the boat we prepare Janis for the track. Deflating our tyre pressure to 25 psi, locking the hubs and put her in high 4WD.
After 30 min we arrive on the island… Let the adventure begin!

That evening we do not much more than driving the 7 km’s to the central station campground where we stay that night. Our first day we keep it quiet and drive first to lake McKenzie, the best known freshwater lake on the island. There we enjoy the white sandy beach and the cool waters.
Afterwards we drive some 21 km’s over the sandy tracks to the famous 75 mile beach… Underway we have to replace our spare tyre from under the car on the roof. The trails are too high, so we get struck in the sand with that wheel. After the replacement all goes well, except for our eggs. However with 6 broken and 6 entire ones the bumpy roads didn’t do that enormous damage.
Upon arrival at the beach, we just feel happy! Driving with 80 km’s an hour along the coastline is really stunning. We enjoy the wind and the sea during the trip to our beach camp near Eli Creek. That night we fall asleep with the sound of the sea once again.
Just an amazing location.

Next morning we wake up by a magnificent sunrise. We leave very early. It is low tide around 5:47 am, so we need to use that to cross the coastline till Indian Head. Along the beach we enjoy the sight of the Maheno shipwreck, the pinnacles and the red canyon. This Maheno wreck got lost in a cyclone in 1935. while being towed to a Japanese scrap yard, but it found here onshore its last resting place. At the Head we get struck into the very deep and soft sands when we leave the coastline and drive inward, but are soon released by a big 4WD. With another bit of information about how to drive on that spot, Ilse drives Janis through the soft sandy layer.
The 3rd gear in low 4WD is a really powerful tool, we’ll use him quite often in sticky situations.
After that we drive to Orchid beach, with another stunning beach view. The sand trails here are really deep and quite soft, but we get no more troubles. Unknown we drive almost too far till the Ngkala Rocks, a spot known for the dangerous deep, soft sands. Luckily someone is struck before us, so we cannot cross. We can’t help him either because Janis has not enough power to tow him out. On our way back we send some of the real adventurers to get them out… That is so nice on this sandy land, everybody helps one another if they get struck, so you never feel that nervous if you drive yourself too deep in the sands.
After that we drive back to the champagne pools, the only saltwater swimming option on the island. All beaches are to hazardous to swim and the presence of some animals don’t helps a lot. There we rest at seaside and enjoy reading.
Halfway the afternoon we cross the island to our campground at Wathumba Creek at the other side of the island. This beach is covered with mangrove forest. There we spend the rest of the day and enjoy the sunset. At this side you can only get with your own car. Hired cars and tours don’t visit that side because the more remote character. However that’s why we like the spot.

Today is driving day… In the morning we want to leave the Wathumba campground as soon as possible! Sandflies and mosquitos decided to give us a hard time! Quite unpleasant.
We want to return along the western coast of the island, but with a steep sea creek crossing as a start, we find it too hazardous, so return along the way from yesterday. To Indian Head and along 75 mile beach. There we stop first at Eli Creek, a crystal clear fast flowing stream. For us it is especially an early shower! We stop also again at the Maheno wreck for another couple of pictures.
From then we drive inland along some of the scenic drives. We visit the knifeblade sandblow lookout, this is the highest one here on the island. These sandblows are a kind of walking dunes, formed by the continuous eastern winds that blow the sand inward. Each year they move a little more inward.
We stop at Lake Allom, but find it not that interesting and then we get lost on the trails, what makes us arrive at the west side again, near Moon Point. We look at the bay and return then to Lake Garawongera, another freshwater lake.
For these couple of days we already drove almost 350 km in the sand… Mostly exciting, sometimes tricky and ever changing.
Afterward we return to pick a beach campground near Happy Valley. Here we relax at the beachside, look at passing cars, look at a DVD in open air and enjoy the beauty of the island.

On thursday we plan some more scenic drives on this sandy earth spot… But before we leave, our rooftop rack needs some reparation. Thereafter we take a turn inward along 75 Mile Beach to lake Wabby. This is the deepest lake on the island. Most of the lakes are perched ones, which means they are only filled by rain falling on an impermeable soil layer. This lake is a barrage lake, formed by the massive Hammerstone sandblow. Soon he will erase this lake, because he’s moving an incredible 3m each year.
After that we take the most challenging routes until now. Soft sands, inclined, deep holes, muddy… but really rewarding! Once we get almost stuck in the sands, but after some trials and a little tyre deflation we drive ourselves free! Jippie!
Along the road we pass lake Birraween, also a perched one almost as beautiful as the McKenzie but much more quiet. Lake Jennings and lake Benaroon we simply pass. At lake Boomanjin we take a look, because this is the worlds greatest perched lake, 200 ha. But there is not that much to see.
Another beach camping is ours today.

Unluckily the sandflies and pincer flies stay our allies all these days. I have to use almost an entire flask of tea tree oil against the itching of the numerous stings. My arms, hands and legs are one red bubbly terrain.
When we ever return, this will be something to take care about!

Today is our last full day on the Island. Before we leave we just want to enjoy some more of this paradise. So we plan a trip along some of our headlines. Reading and driving at 75 Mile Beach, swimming in Eli Creek and Lake McKenzie and driving some inland tours.
That’s all we do before choosing a beach camping.

After one week on this sandy world, it is time to move on. We drive one last time a part of 75 Mile Beach, to Hook Point. There we take a ferry to Inskip Point on the mainland. After 10 mins we’re already there.
From there we drive to Carlo Sandblow, from where we have a nice view at Rainbow Beach, known for its many colours of sand. They already counted 72 different shades. After a small walk, we head to Noosa National Park, to try and spot some koalas. During that trip, it starts raining heavily. We choose a 4WD track shortcut to kick off, the last days we drove 550 km on sandy trails, so normal roads feel a little strange. The rain made some parts of the track trough this Coonooloonan Park quite muddy, but we pass it easily. The trail winds trough pine forest, eucalyptus trees and some small patches of rain forest.
The continuous and heavy rains make us stop in Kin Kin, a small village on our way. There we enjoy the hospitality of the Country Life Hotel. We can take a warm shower and order fish and chips. That evening we listen to the live band ‘Strange Dreamer’ before going to sleep in our car…
Unluckily the rain wetted some interiors of our car, so its not that easy to sleep well.

During the next days we’ll drive quietly to the Blue Mountains near Sydney. But we plan a couple of stops along the road, to break these 1000 km’s.
Soon we’ll arrive at 20000 km’s driven here in Australia… 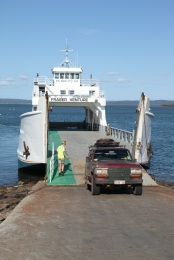 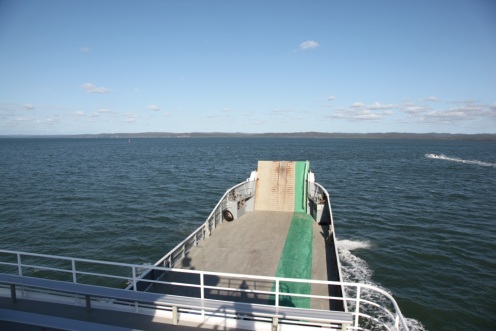 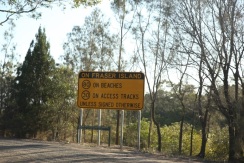 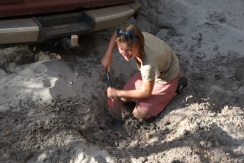 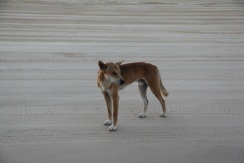 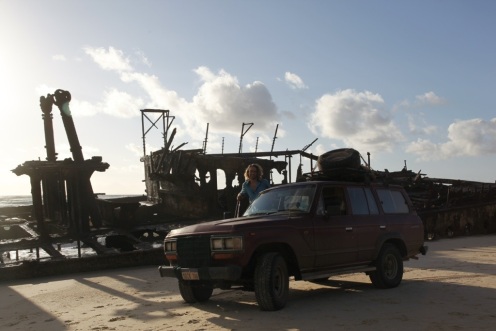 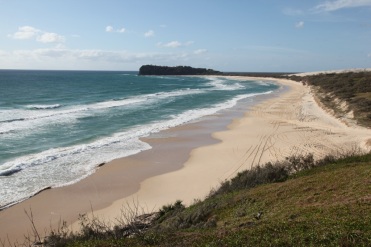 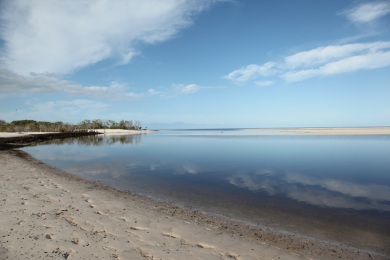 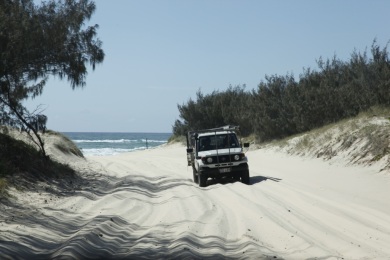 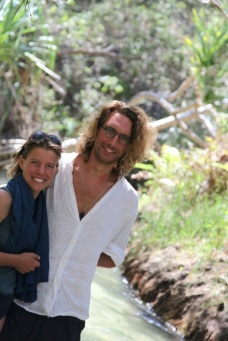 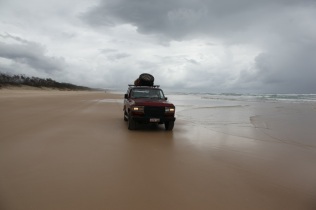 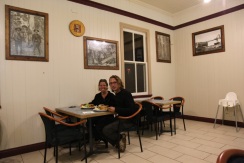 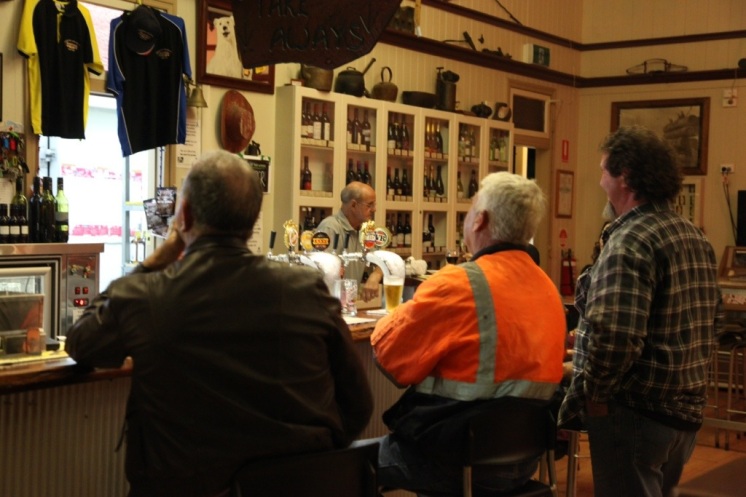